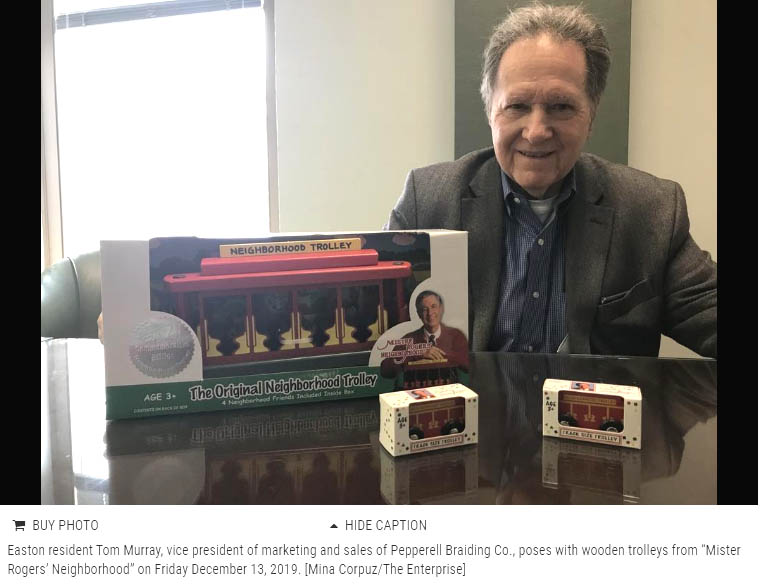 EASTON — Many remember Fred Rogers and his long-running show, “Mister Rogers’ Neighborhood,” for the life lessons he taught or the cardigans he donned.

For the oldest toy company in America, he’s remembered for the wooden trolley he used to take viewers into the show’s Neighborhood of Make-Believe.

“We’re very proud to be making this product,” said Tom Murray, an Easton resident who is vice president of Pepperell Braiding Co., which produces the trolleys.

“Mister Rogers’ Neighborhood” aired for more than 30 years, spanning from the late 1960s to the 2000s. As host, Rogers asked viewers “Won’t you be my neighbor?” and taught children how to navigate feelings, relationships and helped them feel loved.

Rogers approached Pennsylvania-based Holgate Toys — which Pepperell bought in 2006 — about making the wooden trolleys. He liked that the company was based in the state and made toys with wood from there, Murray said. The company began making the trolleys about 25 years ago.

Today, through Pepperell, the trolleys are still made in Pennsylvania.

“A Beautiful Day in the Neighborhood,” a movie about Rogers, the show and a reporter he became friends with, was released in November. Tom Hanks plays Rogers and Matthew Rhys plays reporter Lloyd Vogel.

Since the movie came out, sales for the trolleys have increased, Murray said.

There are two versions for sale: a regular size that is nearly a foot long and a miniature that can ride on play tracks.

The Smithsonian has been placing orders every other week for its gift shop, he said. PBS, the station that aired “Mister Rogers’ Neighborhood,” also sells them.

Grandparents are the biggest customers for the trolleys, Murray said. Many feel nostalgic about the show and Rogers, he added.

“They beam when you talk about Fred (Rogers), the trolley and the whole era,” Murray said. “What you saw on TV is what you got. He was just a wonderful man.”

Buying the trolleys and taking their families to see the movie can also be a way for them to share the show with younger generations, he said.

Grandparents also tend to be the ones who buy Holgate toys because they’re educational and can keep children busy.

“There’s a gravitation to having children get involved with education but not necessarily through technology,” Murray said.

Murray has been in the toy business for 53 years — nearly half with Pepperell.

When Holgate Toys began in 1789, George Washington was the president. It started out making wooden products, like shovels and brooms, Murray said.

By the time Pepperell bought it, Holgate Toys was one of the last toy companies based in America that made toys domestically, he said.

Pepperell Braiding Co., which is based in a central Massachusetts town of the same name on the New Hampshire border, has been around for about 100 years.

The company started out making shoelaces and candle wicks, later expanding to craft materials and home decor. Now it is known for producing macramé cord and plastic lanyard string that is commonly used to make key chains at summer camps.

Murray said the company tends to keep to itself and focus on making toys, crafts, and other products. Not everyone may know about Pepperell, he said, but that’s okay.

“We’re a small company and we don’t pretend that we’re not,” he said. “We work very hard to do what we do.”

Story courtesy of the Brockton Enterprise